We landed in Moscow from Yekaterimburg and decided to take the train to the city (avoid traffic, enjoy the view and the comfy ride) and then take a quick Uber back to ” The Kamergersky”

Once there, we figured out that we wanted to go out for a quick bite we settled on the Kebabs from around the corner. Very very good kebob.

On Friday we had to move to the holiday inn so after a late morning and breakfast, we took a cab to the Holiday Inn Express close con the train station.

Our previous hotel ( Kamergersky) had a very special charm, but most especially prime location in the middle of the party. The new hotel looks and feels new and it has blackouts (wow), the room is nice and modern although the hotel is in the middle of nowhere ( can’t win them all)

We went out for a bite to eat near the Red Square and went into the fan shop at the GUM. Today we were really tired, Gabriel was even a little grumpy so we headed back to the hotel and settled in.

Our first stop was Izmailovo where we shopped around for different thingies but mostly observed and enjoyed.

It was very strange to watch a market where the “store” owners are not really into negotiating.

We asked Sam to take us again to the FIFA Museum because today the Cup is on display ( it’s not everyday) and I thought we wouldn’t get a chance to see it but voila. We managed to get some pics with it as well as the Korea match ball ( yeeeeeeiiii) and the Sweden match ball (😡) and we continued on our journey.

Next stop the space museum and the VVT ( sort of a Soviet Epcot center) it was very interesting to see the beauty of the park and the different construction styles.

During the tour we also had interesting politics conversations with Sam. Very interesting the see the contrasts.

Next was the trip to the space museum, dedicated to Sputnik, Soyuz, Yuri Gagarin, Laika,… and all the accomplishments in the Soviet/Russian space program. The museum is entertaining and well documented maybe a little too traditional ( in the sense that it is not interactive) but very instructional.

Very interesting that at the entrance to the museum, they had a very large picture of the Aztec Calendar ( see picture below)

As we were leaving the museum to go the last stage of our tour, the metro tour, the Argentina match started. The kids were wrestless so I managed to get a streaming version of the game up and running on my iPhone.

As we were making our way into the depth of the subway station next to the museum we watched the penalty kick awarded to France and scored. (very cool, some trains even had screens projecting the game live)

1. Imagine how long those escalators are ( most subway stations are below 50 m )

The metro in Moscow is amazing. 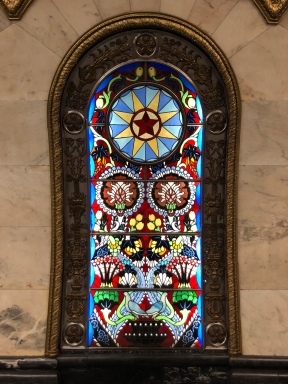 Almost as if each station competed against each other in terms of beauty and design. ( sculptures, paintings, murals, painted glass, porcelain,…) but also cleanliness. For security purposes there are no trash cans and yet you can walk hundreds of meters without finding any trash on the floor.

One thing the guide showed us that was really interesting is that most subway stations are also fallout shelters in case of nuclear war, they even have sealing doors. ( very very large of course)

After the tour, Gabriel’s stomach was acting out so we decided to call it a day.

Sunday was our last day in Moscow, we had reservations to go to the búnker at 130 so we woke up late and made our way to the bunker.

From the outside it looks like any normal building but then you go down 20 flights of stairs into a huge bunker entirely surrounded in steel tubing ( each little section weighs a ton) and we had a very fun tour there ( I believe it was more fun for us adults who at some point lived through a little bit of the Cold War vs the kids) Turns our there is very good WiFi at the bunker so I was able to upload some Facebook pictures.

After the bunker tour ( I’ll admit it, I decided not to climb the stairs) we headed towards Arbat to watch the game and settle for some late lunch or early dinner.

We made our way to the HRC where we enjoyed a nice lunch with some good food, excited Russian fans, pretty Russian models, Life is good.

It was great to have the host advance, the entire city was celebrating, big big party. singing, chanting everywhere. The mood was spectacular.

I cannot think of a better way to close this part of the trip. We walked on the pedestrian street Arbat for about an hour enjoying with everyone else and then we parted towards the airport as we have and early flight tomorrow and this city is going to get pretty drunk in a little while.

The next day we woke up very early to take a flight to London and after a few hours, we’ll connect with Aeromexico to go home. 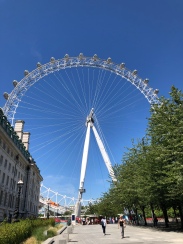 This trip has been one great adventure, particularly as a dad.  Going to the world cup, a fan’s dream.